Severance Agreements appear to be part of common practice with state level elected office holders, but we are not sure what true reason such an action is justified for a state employee.  Normally, if you do your job you keep it.  Screw up you get disciplined. Screw up real bad you get fired.

Indications are that severance packages have been offered in lieu of exposing wrongdoing in the Treasurer’s office.  The question is, who committed the wrongdoing?  We filed a FOIA with the State Treasure, Dan Rutherford, who is a candidate for the Governor’s race and currently facing a Federal Law Suit  that contains some disturbing claims to include the groping of an employee’s genitals (#39 in complaint). The FOIA asked for all the severance packages offered in the last 2 years.  We will update when we get a response. I suspect they will refuse to provide the public record.

In the business world a severance agreement normally takes place for a number of reasons, but more often than not it’s done as a means of getting rid of someone that has dirt on the organization.  Yes, there are times where management simply wants to change directions and they offer a buy out of an existing contract, however, that doesn’t appear to be the case with Governor Candidate Dan Rutherford.

His office is scrambling and it’s clear by recent press conferences, he is offering no answers other than straight up denial.  He is doing a pretty good job blaming the front runner in the race, Bruce Rauner, however, he has failed to provide any evidence to support such an accusation.  In fact, he has even refused to provide the investigative report done in his own office which he claimed found nothing wrong.  Now if it found nothing wrong why on earth would you not release the information?  More on his refusal to release it can be found here.

What I find interesting is all the buzz around these allegations and the talk of sexual harassment, yet not one main stream media is asking the question.

With his own confirmation that he routinely shares a room with his executive assistant Joshua Lanning, who recently received a 50% pay hike yet cites he does it to save money for the campaign?  If saving money was the issue, why on earth do you bolster someone’s salary 50%?  Is it odd that he has never shared a room with anyone other than this guy, considering he wants to save money?  I could care less what his sexual preference is as long as he doesn’t legislate that personal agenda.  Indications are pointing to a cover up with refusal to provide tax payer funded investigation reports, and that should be concerning to all.   If we can’t trust him with a simple investigation report what else needs questioned?

More links pertaining to the troubles facing Dan Rutherford are listed below: 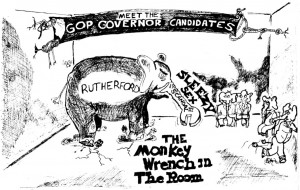