PARIS, IL. (ECWd) –
During the Edgar County Board Study Session this morning (2-10-2014) at the Highway Department, a board member provided an update to the  Edgar County Audit performed under former Chairman Jim Keller, and the questions we have been trying to get answered for almost 2 years. See the article I wrote last week  (click here).
As it turns out, the Board finally has a confirmation from the auditors that the “NOTE 12” in the audit for fiscal year 2010 was not an accurate reflection of reality. Statement in question (in case you have forgotten):

NOTE 12 – NOTES RECEIVABLE
Effective October 1, 2003, in consideration of $100,000 and the assumption of all assets and liabilities, including a $293,316 real estate loan, the County turned over the operations of the ambulance service to buyers Dee E. Burgin and Lisa L. Burgin d/b/a Edgar County Special Service Area Ambulance, Inc. Per a new agreement September 1, 2005 to August 31, 2010, the Special Service Area No. 1 Ambulance District will pay back the $100,000 by making monthly payments at $800 per month at zero percent interest. The amount owed at November 30, 2010 is $-0-.

The auditors did state that they will need additional information from the County in order to correct or remove that note from the audit. The County Treasurer will provide whatever information they require. There is no financial cost to the County for this correction.
We already know the answer, hopefully the corrected audit will state the Truth.  If they attempt to use the lies submitted to the States Attorney on this matter, we will once again take measures to expose the facts. Mr. Isaf refused to question the two lawyers involved in this transaction because they are now both judges.  He has also never questioned Dee Burgin’s ex-wife and he refuses to meet with us, which would immediately defuse the lies he has been told.
Like the lie that the ambulance fund was brought back to $100,000.00 by Dee Burgin accessing his credit line. Hey Mr. States Attorney:  If what you wrote in your opinion about a line of credit being used, then we now have yet another piece of evidence that doesn’t match the lies being told, and is in fact a lie itself.
If it was paid back with a line of credit by Mr. Burgin as you claim, there would be a deposit reflecting that fact, which there is not so it’s not true!  More disturbing is the fact that the audit claims the action that brought the account back to $100,000.00 was done by a new agreement in 2005, which is two years after the time frame you claim the issue was resolved and was done by paying $800 a month for 5 years.  So which is it Mr. Isaf?  It was paid back with a line of credit or with monthly payments? Can’t be both!
It’s clear Dee Burgin and others on the past county board were not honest with the State’s Attorney, but it doesn’t take a Sherlock Holmes to see the information provided is not supported with the paper trail we have.
While we await the Treasurer’s input, let’s remind everyone of all the facts already established and proven accurate.

This is what the contract says as far as seller and buyer obligations.

1. That the Seller (Edgar County) shall sell to the buyer, all ambulances, ambulance equipment, other supplies, including furniture and fixtures, bad debt accounts and outstanding patient accounts for the Special Service Area No. 1 Ambulance District of Edgar County.
2. That they Buyer shall pay to the Seller for all ambulances, ambulance equipment, other supplies, including furniture and fixtures, bad debt account and outstanding patient accounts, the total sum of One Hundred Thousand Dollars ($100,000.00) (PROOF).   That a more complete breakdown of all assets being purchased and the value assigned to such assets is attached hereto and made part of hereof as Exhibit A.
Note that very clear statement that Exhibit A has a complete breakdown of ALL ASSETS!  A forensic audit of Exhibit A has been performed and even though the contract claims there is a value assigned to each item, nothing in that Exhibit, which is public record, has any value assigned, nor is there a shred of truth to the claim that the $100,000.00 the county wanted to keep in the account was a negotiable asset for this transaction.
In fact, the contract language is very clear and states that the buyer SHALL PAY to the seller the total sum of $100,000.00. It DOES NOT say or remotely imply that Dee Burgin and his now ex-wife are not obligated to pay anything as long as the county keeps the tax money it had collected for ambulance service.   This fabricated “story” came about after we raised the questions and demanded a copy of the payment made, which there was none.
Prior to the fabricated story Dee Burgin contacted Kirk while on duty and spent every bit of two hours on the phone making demands and threats (should have been doing his job).   He was neither impressed nor intimidated, which was clearly his attempt.  He was however very attentive.  You see in that conversation this very subject came up, and Dee claimed to have a payment voucher in his possession that proved he paid for it.  To this day no such voucher has been produced and we now know that no such payment was ever made and NO ONE with any sense of the English language can read the purchase contract and come to the conclusion he didn’t have to pay for anything, which is what actually happen.
All that aside, our County Treasurer has confirmed NO PAYMENT has been made into any Edgar County account for the purchase of the Ambulance for $100,000.00, or any other amount for that matter!
Read past articles on this subject by clicking HERE. 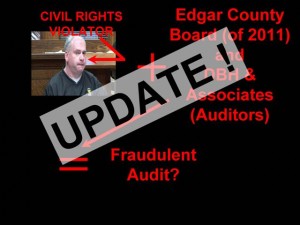