Vermilion County’s John Dreher: “I Am Done With You.”

Whatever happened to listening to citizens after you are elected? That concept must have left the station when John Dreher got involved.

“I will no longer have any contact with you in any form. I am done with you.”

What a splendid way to ensure you are looking out for the citizens of the county – quit talking. Mr. Dreher needs replaced when his term expires, he is clearly too comfortable in his position.

That was John Dreher’s response to this email sent to all Vermilion County board members:

Last month, Fond du Lac County began searching for ways to assess the health
problems caused by InvEnergy’s project up there.
Look at the attachment which describes the situation.

Pilot Township Vermilion County Illinois folks are having the same problems
as these others.  Like them, we have been begging for help.
Unlike them, the Vermilion County Health Dept. staff hesitates to document
our complaint or provide any other assistance.  (Fond du Lac County Board of
Health unanimously passed a resolution seeking assistance for their
citizens.)

The Vermilion County Board might want to rework the ordinance to protect our
citizens and also instruct the county health department to document and
record the health issues which we present as being caused by wind turbine
noise and/or infra sound.

So instead of intelligent conversation, he sends a two-sentence response that is typical of someone on the losing side of an issue.  This issue happens to be the adverse health effects experienced by citizens of Vermilion County who live near wind turbines. All the person was asking for in this email, was that the Vermilion County Public Health Department document complaints in reference to the turbines. This is common practice in other counties and states, but for some reason the VCHD doesn’t want to cooperate. Was it too much to ask, or does Vermilion County have board members that are benefiting from wind turbine contracts?

The writer responded to Mr. Dreher’s insulting comments with this unanswered email:

Mr. Dreher,
If you can’t take input from citizens of this county, then you should not be representing us on the county board.  My emails have been upfront, honest, and truthful.  All we wanted was fair treatment.  There is hurt and suffering going on, and a certain group of regular citizens who have never been activists ever before have brought this problem into the daylight.
You have left the past 3 meetings early, and you have not been there to hear the concerns and testimony from the residents during the public comments.  You are paid $100 per meeting, and you failed to do your job for the past 3 months.  I think your constituents are due a refund.  You are a public official, and you should start fulfilling the role and responsibilities that go along with it.
There is an audio tape of the last few meetings.  If you listen to those, you will hear the part about how there is no negative comment or threat from a county board member which will overcome the regular reminder my family and neighbors live with every day when wind turbine noise intrudes our existence.  There is still time to forgive and move towards a resolution for this problem which still lingers and has a chance to grow and hurt others.
I think emergency action needs to take place to reduce the possibility of others to be in my situation.  I don’t wish my problems on anyone else, and this was a mistake which needs fixed so it doesn’t reoccur in the future.
Since the Verm Co Board is aware that numerous people are having trouble now, future victims may have a stronger legal case against our public body consisting of officials who had the information but failed to protect the safety and welfare of citizens.
You are a lead paint inspector, and it took some time for us to learn the hard way about the dangers of lead exposure to children.  It also took time for us to learn about the dangers of smoking cigarettes.  At first, smoking was allowed throughout a restaurant.  Then, it was removed into smoking sections.  Then, it was moved to the outside.  Then, it moved to a setback of 15 feet from the entrance.  This is how wind turbine setbacks are going to be evolve over time……it is inevitable, so stop posturing.
—————————————-

Rest assured, there is more to come on this issue, and incidentally Mr. Dreher is one of the board members that refuses to listen to the public when they speak during public session at county board meetings. He gets up and heads for the exit.

Please give Mr. Dreher a call and tell him that you are not done with him, and that this is unacceptable behavior for an elected official. 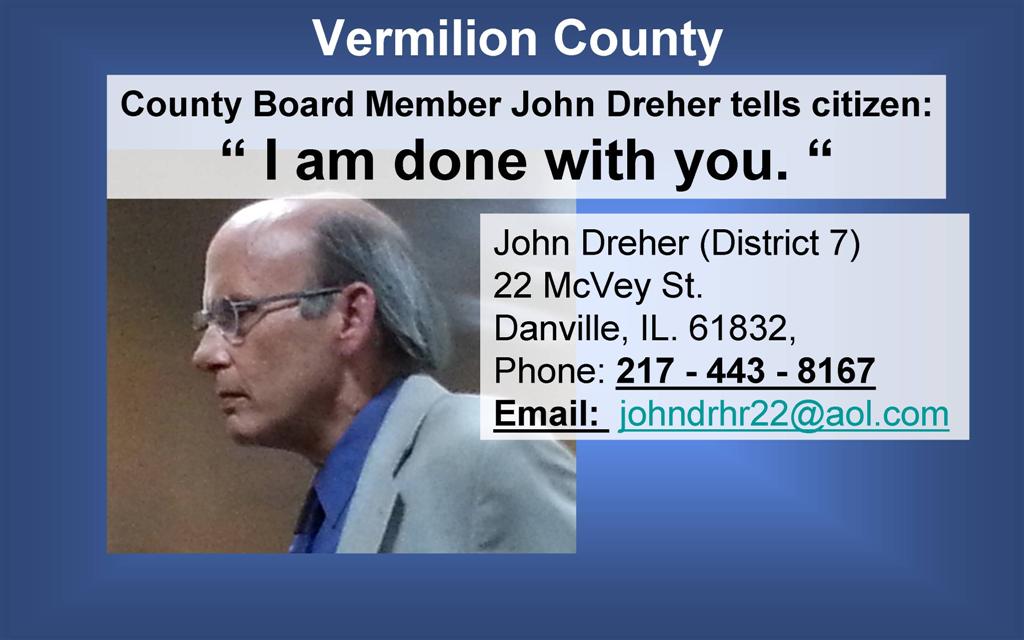