Adonna Bennett, pictures she took, and the mark of the Beast…

In our previous article, we said we would do a comparison of the photos Bennett gave the county board and the photos I took, using my own time and money because nobody else would help me (those are the words she used during the meeting) because I am concerned about the situation at the airport. Scroll to the bottom the see the mark of the Beast!

We will post one picture at a time, with my notes of those pictures proving she was clueless as to what she was taking pictures of – or was intentionally misleading the county board.

Ah, the Baron,  this aircraft was involved in a charter business that was renting Jimmy’s office and the main hangar years before RSB came to Paris and was offered the 5′ by 12′ office they occupy now.  This aircraft suffered an in-flight engine failure and has been an inoperable ornament years before Rusty started his business.  It occupied space in the main hangar collecting dust and with flat tires. It might be interesting to note the owner lives in Chicago. The aircraft was removed under Jimmy’s recommendation to the board, as ample opportunity had been given to the owner to return it to operable condition.  When it was removed RSB immediately rented the space.  The County has NO loss of revenue (despite what Bennett says) from it’s removal.  Hangar rent is only one source of income.  Fuel sales is another.  Clearly this aircraft hasn’t been buying fuel from the county in years, whereas the increase in the number of RSB and other planes means increase in fuel sales – which by the way has been drastically reduced since this witch-hunt started.

Her statement regarding this phot is a LIE and is attempting to deceive the county board: 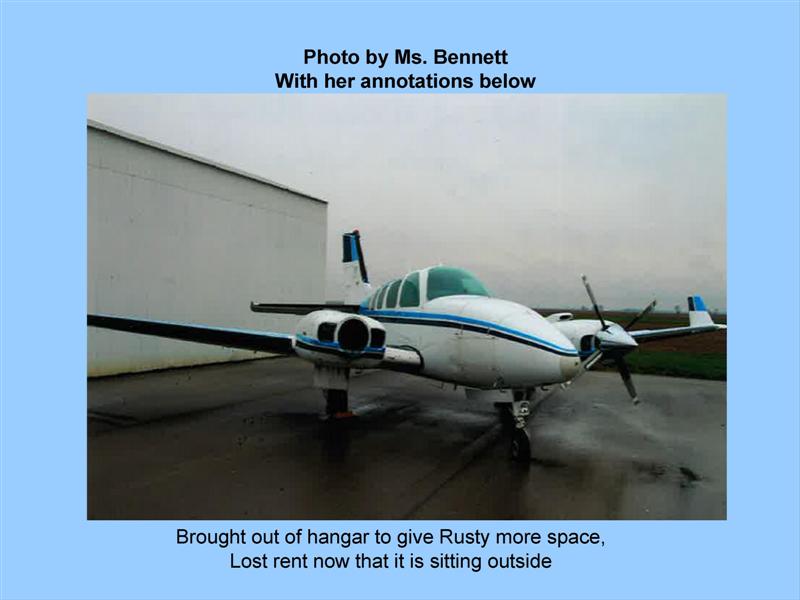 These are buckets used to drain oil, then a lid is placed on them, and the oil is hauled to a recycle station. 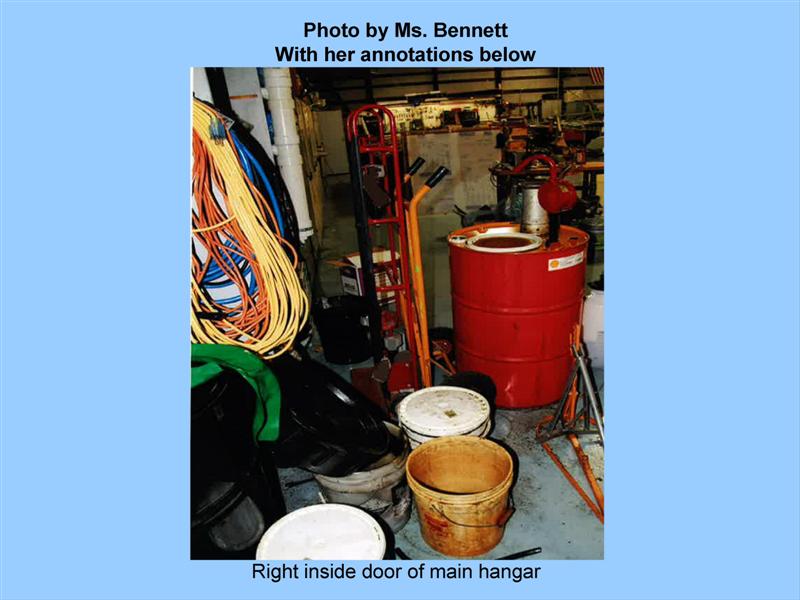 This shows two modern desks, computers with dual screens for interactive pilot training software (stuck in a scene from the 1970’s),  dry erase board, and wall hangings describing the national airspace system and types of cloud formations. Visiting pilots always use these RSB computers as they prefer these to check weather.  RSB have often stopped their work to let them do this as it is a professional courtesy to have these available and the airport does not have reliable access to weather except for these. In this room you’ll also find other teaching aids to help new people interested in aviation.  Training new local pilots is something essential to the health of an airport.  (Speaking of a professional environment, it’s interesting Adonna didn’t provide a picture of the nicotine stained mounted fish on the wall behind her – it is distracting and unprofessional in an airport).
More deception: 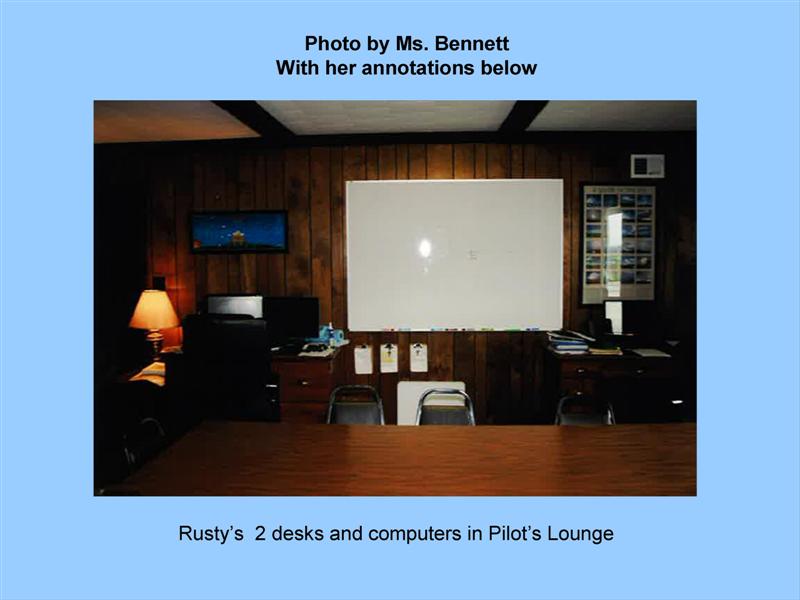 “The Camera”
I’m baffled.  Is she suggesting that a security camera to protect a business is inappropriate?  Who would feel the same way about their bank?  It is quite common to have cameras to protect businesses and personal assets. Or is it because she doesn’t want to get caught rummaging though the rented space of a business when they are not there? 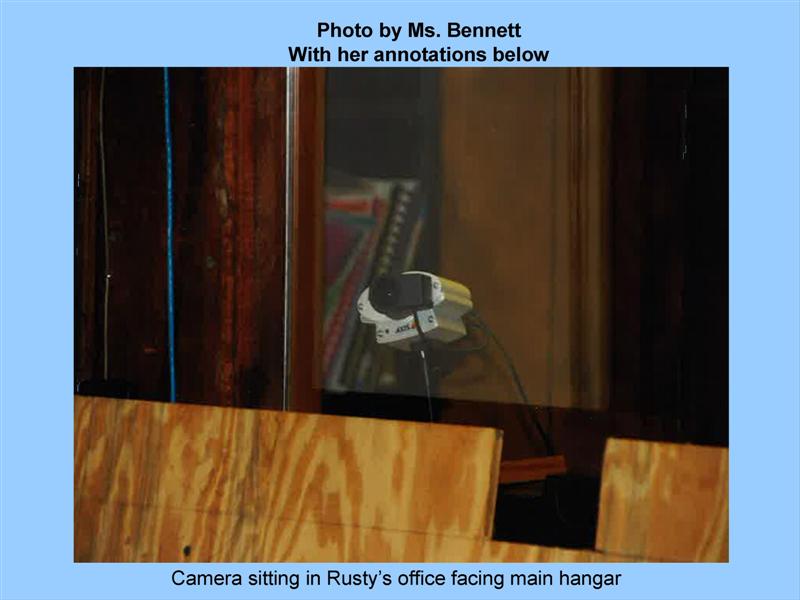 “The Office”
More deception on Bennett’s part – RSB was offered this space as part of the hangar lease: 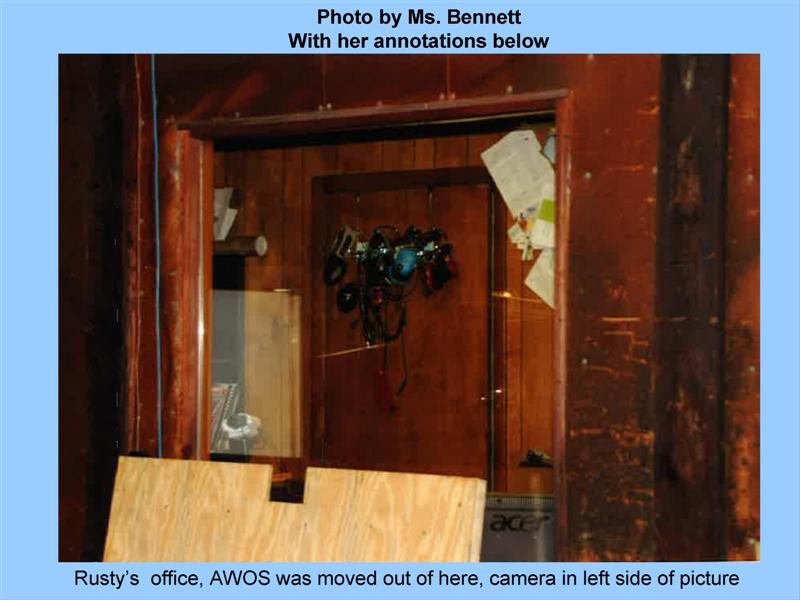 “The Floor”
The picture shows a nice epoxy coated floor. This covers the entire main hangar, worth approximately $8,000.   RSB paid for the entire cost and even have had it resealed once already, while they only rent 75% of it.  RSB has invested (one might even call it a donation) to make the entire dated facility more presentable to customers coming in to have their aircraft maintained at the Edgar County Airport facility.  She points out the garden hose; the water is from a well and is available to all hangar tenants to wash their aircraft.  This is a great time to point out that the water was included in the rent. 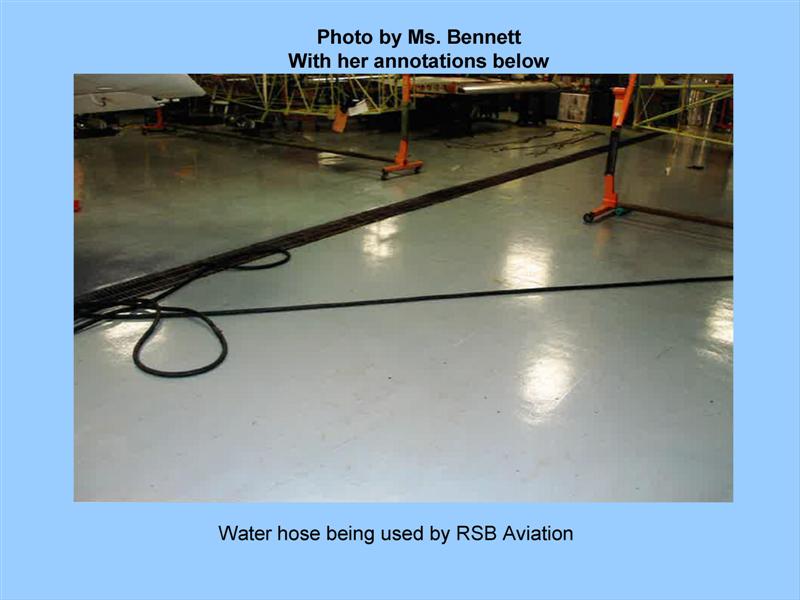 A state registration sticker. RSB sent the paperwork in over two weeks ago for their aircraft, despite the fact that this is not required by the FAA. 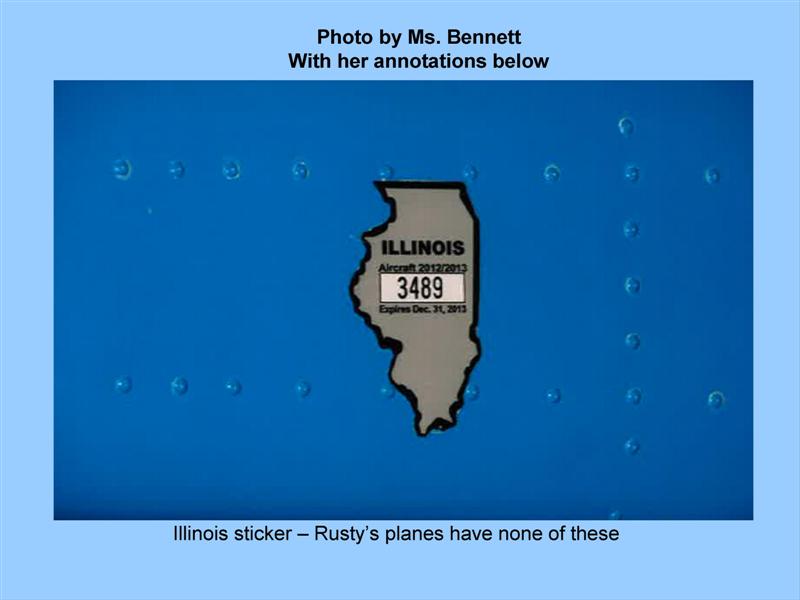 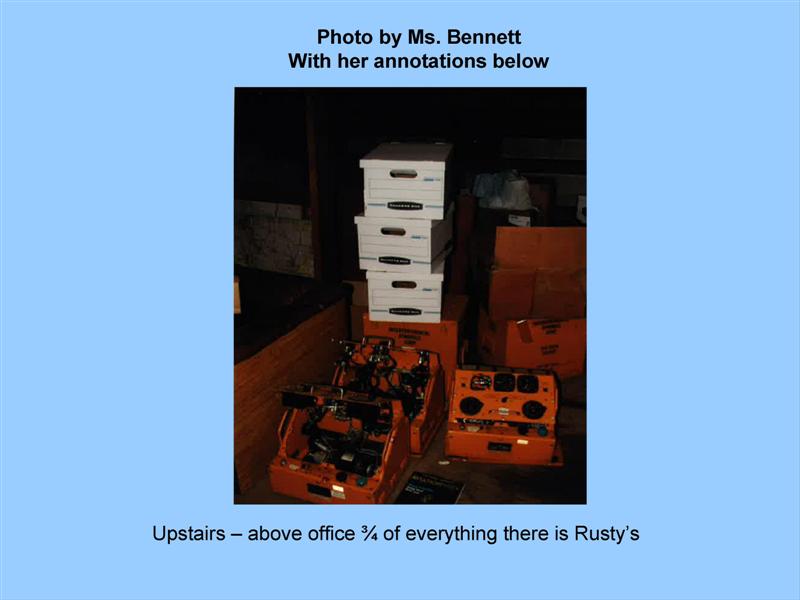 Repairs to AIRPLANE wings in progress; something that some people CAN NOT comprehend why this is going on at an airport.  Perhaps they think a hospital is more fitting? 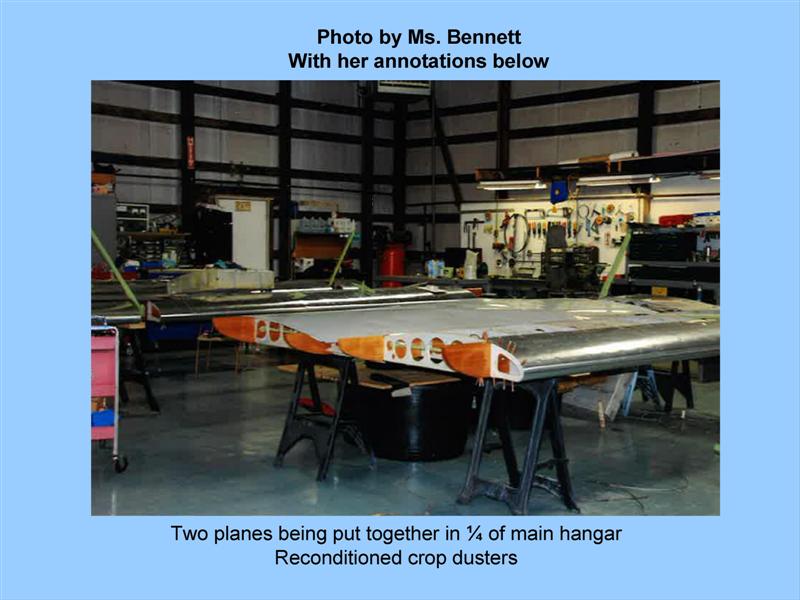 This is more attic storage and a training model for teaching. 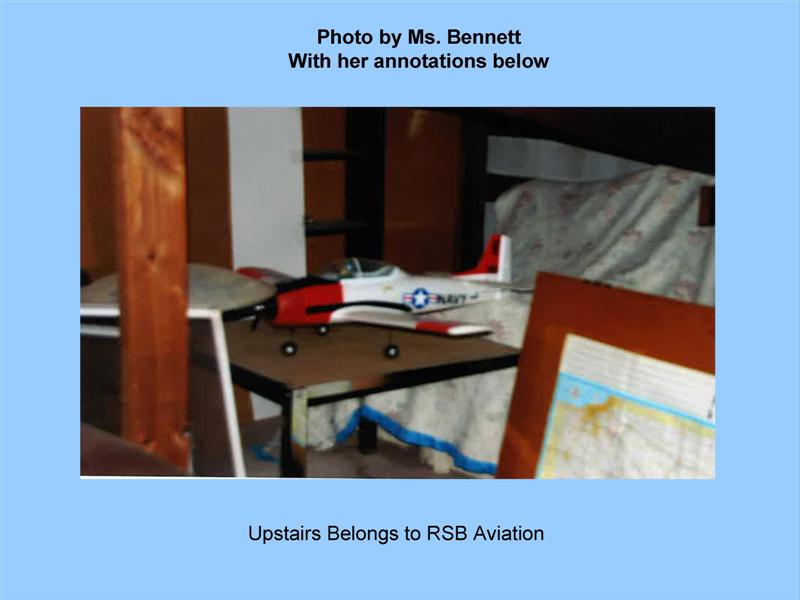 “Boxes”
Boxes of parts in different stages of restoration. These are very valuable pieces of machinery, but it is understandable that someone without aviation education or pilot experience wouldn’t recognize. 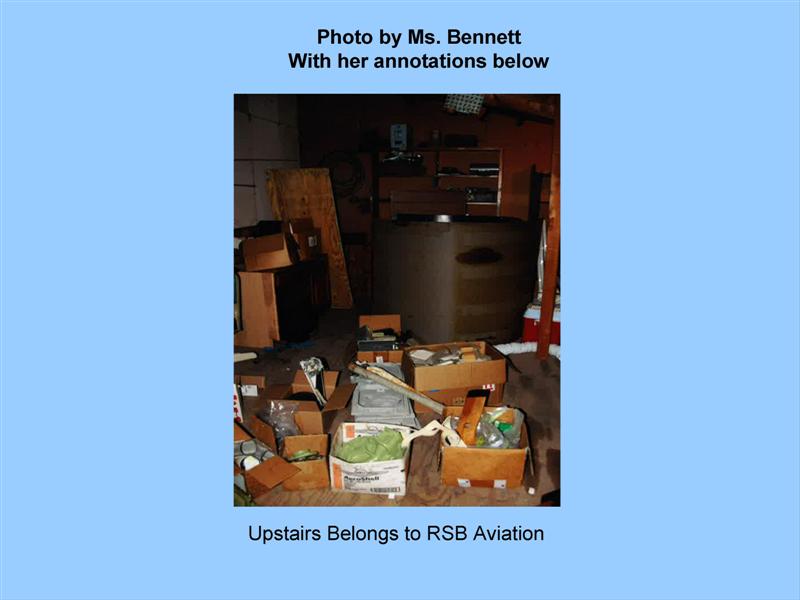 Is she jealous? These are diplomas and certificates of professional training for RSB, Rusty, and his employees.  This seems to be pretty common place in reputable businesses. Since starting the business he has sent himself, multiple pilots and multiple mechanics to many training conferences. Yes, he is proud of his employees and cares about their continuing education. 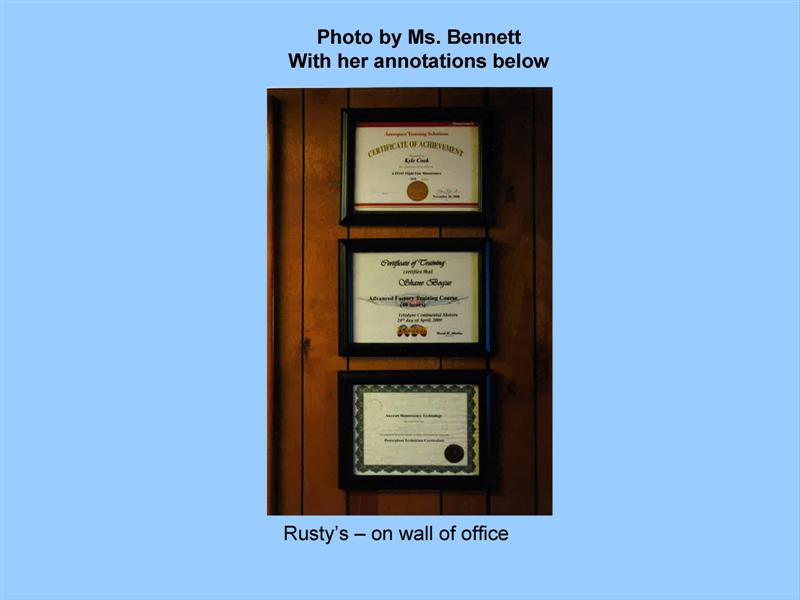 The ramp is covered in stains.  Someone could contribute them to fuel and oil.  Go and look across the ramp and count them by the dozens.  This ramp is much like a restaurant parking lot that isn’t maintained.  More interesting is the lack of ANY evidence who actually made the stain in the first place.
Is this now about stains?
What this does highlight, is that the airport has no money to re-seal the asphalt parking areas and our investigation has determined the County has no established plan to the maintenance of the asphalt which is a requirement!
As a side note, RSB suggested a credit card machine for fuel sales 5 years ago. This would have paid for itself in a year and the airport could sell fuel 24 hrs a day/ 365 days a year. As it is now, fuel is sold 8-4 M-F, Sat 8-2. Instead we pay a full time employee to pump the fuel and a part time employee was hired (at that time) to process charges. All this to rent a few hangars and sell 600 gallons of fuel a month……….RSBs suggestion for the credit card machine was met with much resistance.  If we were not paying people to pump fuel and process the charges maybe we would have some money in the budget to seal the ramp area. 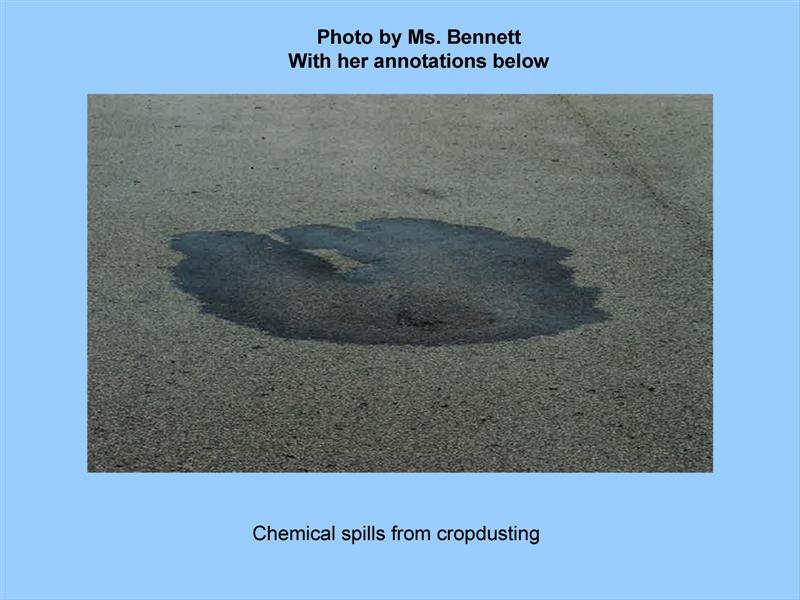 “More Certificates”
These are more certificates of achievement and an article about an airplane.  RSB has many more wall hangings around the airport depicting WWII aircraft  and again………….Adonna, since she says she is the chairman of the advisory board has the nicotine stained fish. 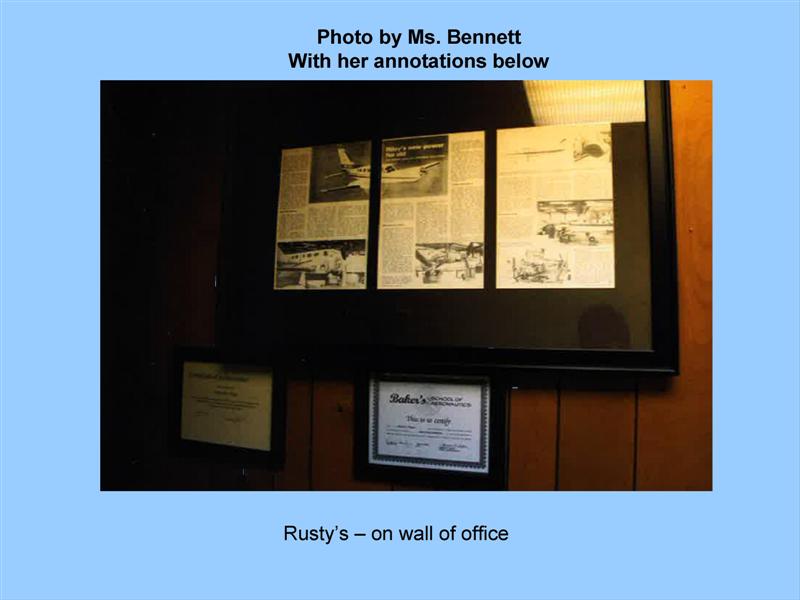 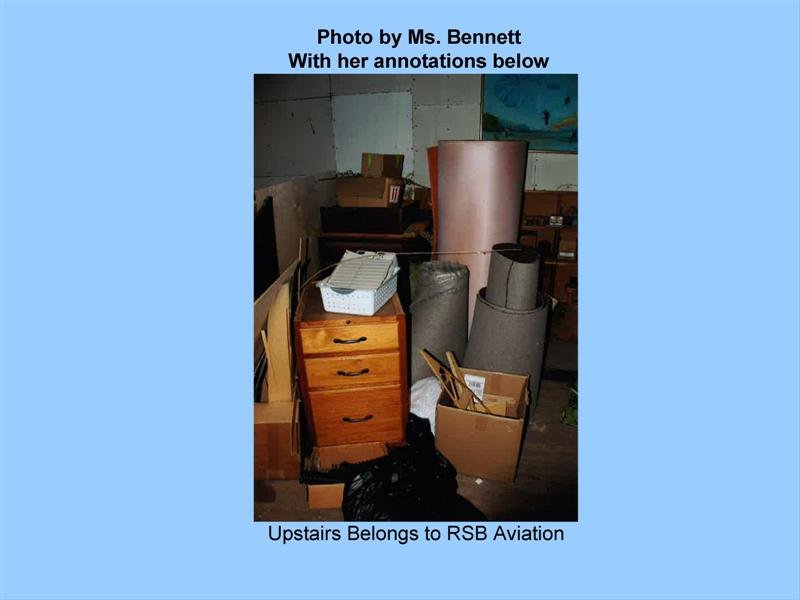 This is not RSBs, nor their employee’s trash. How do I know this? After Rusty saw them taking pictures he went to look at what it was.  There is a cup from Jack in the Box, not sure where the nearest one is but probably someone flying through assumed that was a trash bucket.  They suggested it had been there since last fall, and they are probably correct.   This is the fuel farm area, owned and operated by the county and yet in 8-10 months they didn’t feel the need to pick up their place of business? Imagine that the county owned the marathon gas station and a bucket of trash sat by the gas pump for 8-10 months.  What would we do? Give the management a raise?  Hire a bodyguard? Or run off the biggest fuel customer? 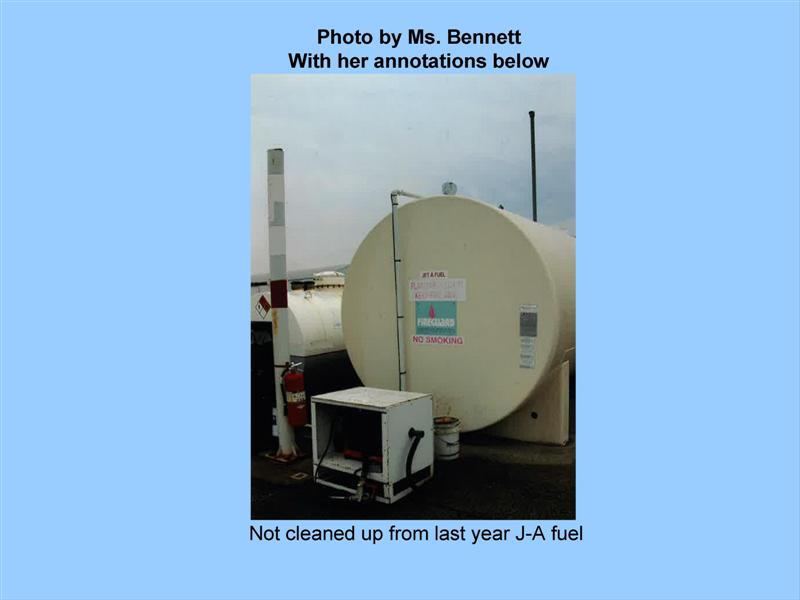 Who can say what stain belongs to whom?  Some are probably RSBs and some belong to others.  RSB has been there for a little over five years. Nobody knows when the last time the asphalt had been resealed, but most say approximately 10 years ago. Shouldn’t the average person, without an agenda, think that over the course of 10 years, some staining will occur?

Notice she keeps mentioning cropdusting, but she cannot prove it came from cropdusting, RSB cropdusting, other cropdusting airplanes, or if it is just oil and grease that leaks out of the county tractor and snowplow that Jimmy won’t clean up. 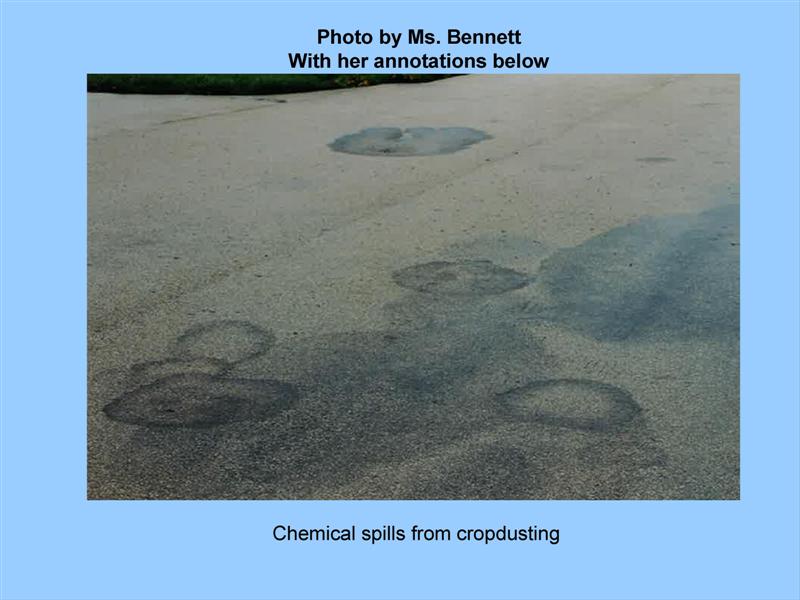 Pictures of a t- hangar used to store parts to support rebuilding Ag Aircraft.  They have to be stored somewhere, and they have to be readily accessible.  If you take a look in Terre Haute at Mills Aviation or Taylorville Illinois Airport, Brandis aircraft has Lear jets in the same condition.  Please note I’m just referencing places where those things sit out in PLAIN SIGHT. RSB rents the area they store these parts in. (2 pics)

What right does Ms. Bennett have to enter a renters space without their knowledge? 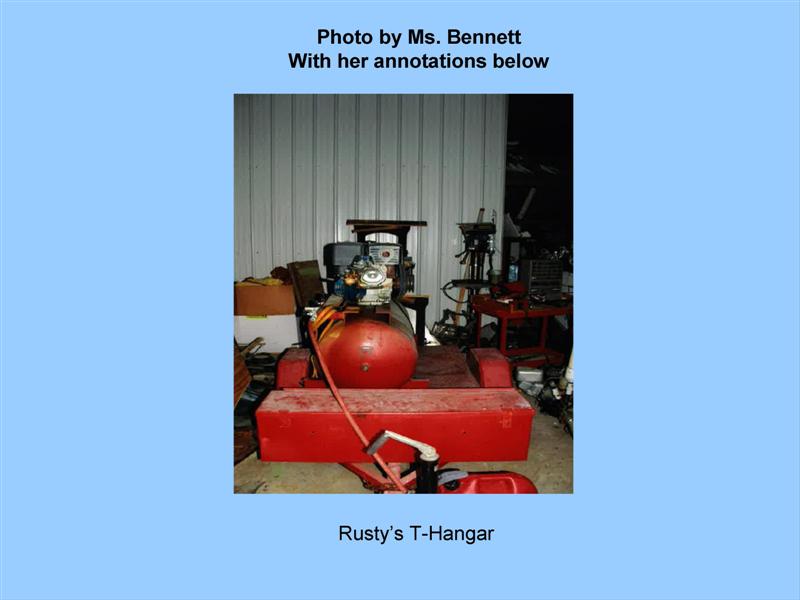 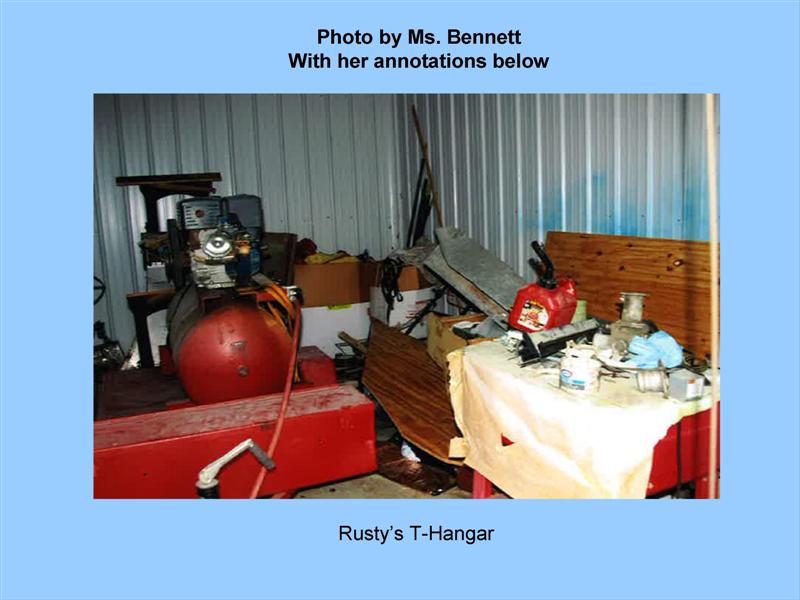 This is new oil in barrels and, again, empty buckets used to drain oil and buckets with lids for the purpose of transporting to the recycling station. 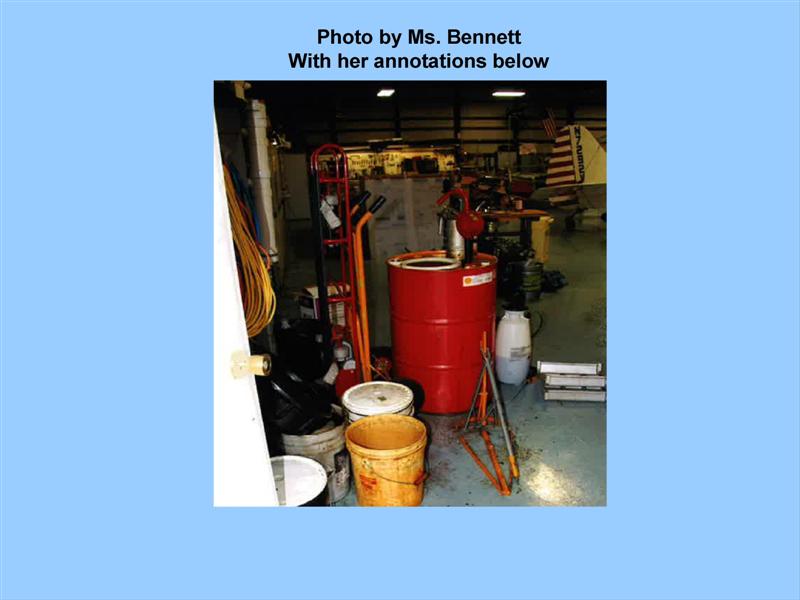 Again these are airplanes that are part of the rebuilding projects actively taking place in main hangar. 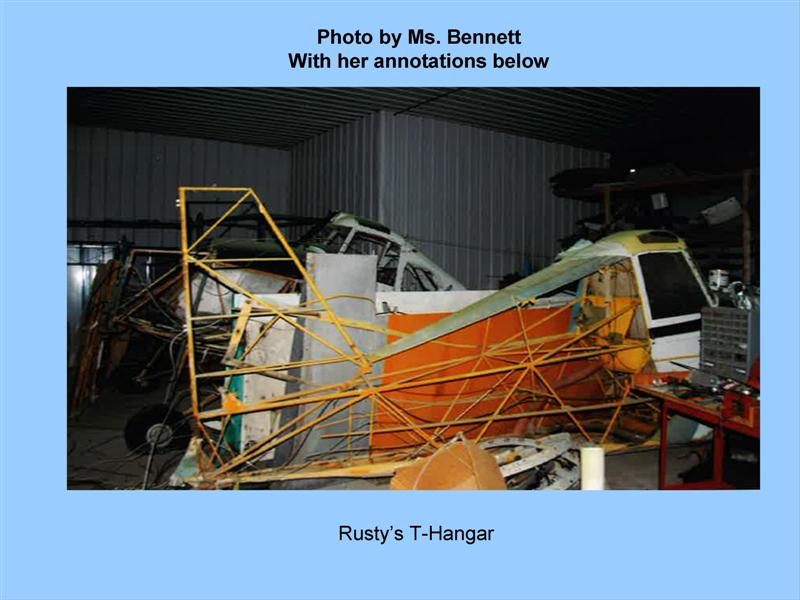 “The Mark Of The Beast”

I’m not saying this means anything, we have more views and less views on a single article, but this is the only time this has ever happened: On May 9, 2013, the article about Bennett’s jaw-flapping had 666 views, in that ONE day.

So there you have it, an obvious witch hunt (no pun intended).