Watchdogs Position Validated by the Feds and the State!

As I reported here, Chris Patrick was sitting in a position with a potential conflict of interest even though he insisted that was not the case since he was somehow taught to read and comprehend differently than the rest of the world.  I covered the reading comprehension here.

Mr. Patrick’s position that simply disclosing the conflict of interest is not valid as he has insisted and that fact was confirmed by both agencies referenced.

“The District has received responses from both the Federal HWA and IDOTS Office of Chief Council.  BOTH offices CONCURRED that Mr. Patrick’s participation on the County Board is a potential conflict of interest in accordance with both Federal and State Regulations/laws.”

I reported that the options to eliminate conflicts of interest are limited and I outlined the only 3 options our research pointed to.

As the documents from the state reflect, its clear Mr. Patrick insisted that the state provide the direction to resolve this issue instead of the States Attorney.  That is a very odd request considering its the States Attorney’s obligation to provide legal opinions to the County Board members, not the state.  I guess Mr. Patrick missed that in his reading of the statute, or maybe he just comprehends it differently.
Sec. 3-9005. Powers and duties of State's attorney.

(7) To give his opinion, without fee or reward, to any county officer in his county, upon any question or law relating to any criminal or other matter, in which the people or the county may be concerned.

Even more confusing is Mr. Patrick’s request to the state for some form he claimed was referenced in the second to last sentence of the Federal conflict of interest law.  No such form is referenced in that Federal Regulation.  Must be another reading comprehension issue.

From the US Department of Transportation:

So what advice did the US DOT have for the situation?

In part – “A solution that meets the FEDERAL regulations would be for the executive to recuse himself from such actions for Edgar County and for the county to establish authority for another individual”.

Its all in the wording Mr. Patrick!  They have advised you on a solution that pertains to the FEDERAL regulations.  The US DOT makes NO reference that such a solution clears you of the State Law relating to Prohibited Interests in Contracts.

The second portion of their solution pertained to pavement selection decisions and suggests a letter stating his firm would not compete for works in the project.

What was one of the three solutions I outlined?

“Never provide ready mix to ANY government job in Edgar County that involves work with County Highway personnel or assets.”

Sounds like the Feds agree with that position so now we need to stay focused on the State Statute and Illinois Court opinions on matters pertaining to Conflicts of Interest.  I will even provide an Attorney General Opinion that has a very interesting statement that also supports everything I have reported on in this matter!

You don’t have to vote to establish the conflict!

Having an Interest IS sufficient to establish the conflict!

Interest in contracts IS an offense stated by the Appellate Court of Illinois – Second District (2nd Division) (PEOPLE v. SAVAIANO)

In People v. Savaiano (1976), 66 Ill.2d 7, 15, this court construed section 3 as barring an official not only “from having a private interest in situations in which a binding contract exists but also from allowing himself to be placed in a situation where he may be called upon to act or vote in the making of a contract in which he has an interest. The evil exists because the official is able to influence the process of forming a contract.”

Conflicts of interest do not appear to be eliminated by recusing from voting under state law/case law precedent!

Such a position is not only upheld by court cases but also by the attorney general!

As quoted from the AG Opinion:  “Therefore, it is Irrelevant  whether an interested person takes part in the letting of the contract or votes thereon.  If the officer’s “DUTIES” are such that he “COULD” or “MIGHT” (emphasis added) be called upon to take any action in the matter of making a contract, that fact disqualifies him from having any interest in the contract”!

I guess the States Attorney is not going to look at what appears to be a clear conflict of interest in the payments that have already gone to Zimmerly Ready Mix for Airport Projects, of which Mr. Patrick was the appointed official in charge! That information was reported here.  Doing my homework, as directed by Chris Patrick, I found some very disturbing things.

If he has no clue who approved the project?  No approval appears in the County Board minutes so any claim that it was the County Board wont hold water! The only other party left that could have approved such a project was the Airport board, of which Chris Patrick has been in charge of for I believe 25 years based on his pre-election interview by the farm bureau.

All those facts aside, lets assume business as usual is going to take place and Chris Patrick is going to be allowed to do business with the county and townships provided he doesn’t discuss or vote on those matters.

An action forbidden to other county board members by the way!

Does that work for the people?

Does the advice of the OCC to Chris Patrick lead to a bigger concern for Mr. Patrick?

I think many will agree it does after reading this!

I don’t see how a public official can intentionally refuse to perform his mandatory duties as required by law.  Is it fair to the voters in Mr. Patricks district to only be represented on certain duties and have no representation on others?  I think not!

What is even more troubling is as the Chairman of the County Board he is required to cast a vote in any matter that is a tie vote from the board.  How is he going to refuse to do his job if or when the vote is tied?

Did he inform the voters prior to the election that he could only represent them on certain matters in the county but not others because he has to make money providing his materials to the very public body he was seeking to become a member of.

As an elected official, specifically a county board member, he is called on to vote under certain powers and duties in that capacity, of which he is required to perform, and took his oath that he would uphold those very obligations.

If the officer’s “DUTIES” are such that he “COULD” or “MIGHT” (emphasis added) be called upon to take any action in the matter of making a contract, that fact disqualifies him from having any interest in the contract”.

Does Mr. Patrick’s DUTIES put him in a position that he COULD be called upon to take any action in the matter of a contract?  YES!  And so established with all the documentation!

Is intentionally failing, or in this case, refusing,  to perform any mandatory duty as required by law a concern?   I believe the statutes on this entire matter are clear and its not just a matter of a potential conflict of interest!

With all this information will the public outcry for doing the right thing be heard?

Will the States Attorney advise Mr. Patrick that State Law still applies and he needs to either resign or never sell materials to the County and or Townships?

Will the public tolerate Chris Patrick being allowed to provide his materials by simply not performing his duties of voting on matters before the board even though he was elected to perform those duties?

I pray not, however lets not forget the actions of the former Sheriff, Tim Crippes and his use of his position in public office while at the same time using his private business as another source of revenue by fixing the very police vehicles he is in charge of. 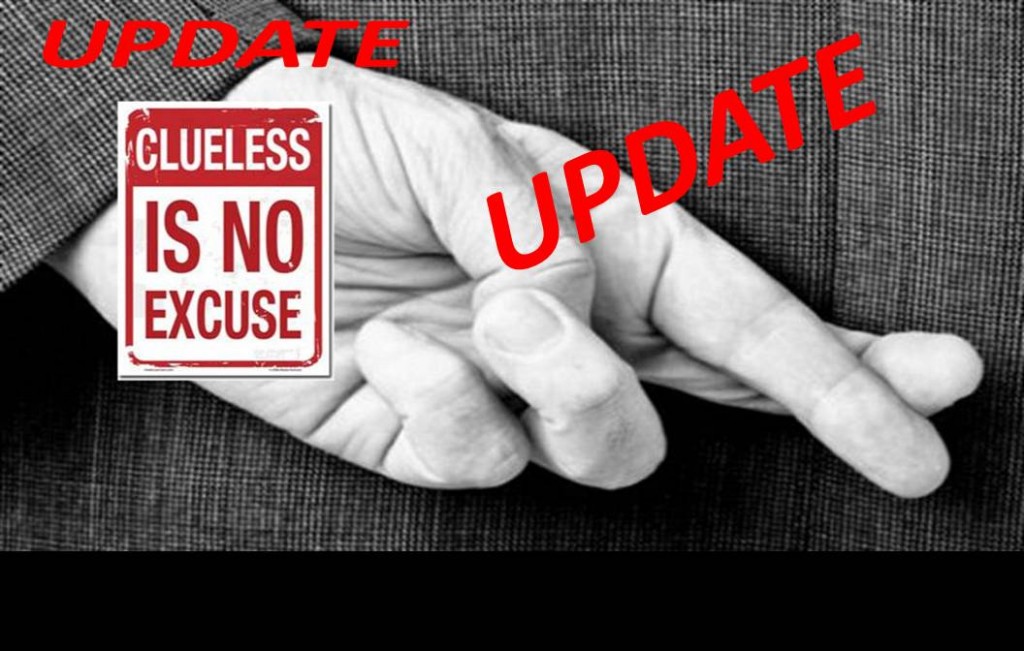