It will never cease to amaze me how one person can be so blind to the law, and the application of the law, all while putting more stock in his own financial interests over those of the public.

IDOT was present at this mornings meeting and their letter sums up things quite well!

They have changed the language and have stated fact now!

“The District has determined that these agreements are unacceptable due to a Conflict of Interest by the Edgar County Board Chairman” – That would be Chris Patrick!

Since Chris Patrick felt worthy of attacking Rusty Bogue’s character, it’s high time to point out some things so that the public is properly informed of the facts!

A man of Character would not provide a document assuring the Illinois Department of Transportation that he would not do certain things and then turn around the day after executing that agreement and then violate it.  That raises questions to his Character, or lack of in my opinion.

Even more amazing is the fact this brilliant businessman, with so much business acumen and great reading comprehension skills, provides the very recusal letter as a County Board member on stationary from his Cement company!  Ignorance, Stupidity, or just clueless?  And as if that is not over the top, he signs a recusal letter as President of Zimmerly Ready Mix.

Who on earth provides a recusal letter that was to be filled out in his capacity as the County Board Chairman and this bright star signs it as the President of Zimmerly?

And he wants to question RSB Aviation’s business skills?

Laws have no meaning for Mr. Patrick, it is clear by his actions.  Even after he claims that he will conform to the law he violates it!

Character Matters and with these actions it’s clear, he has no clue what that means.

I provided this document this morning that came from a top law firm and true experts on criminal application of the law as it pertains to Conflicts of Interests.   I provided a copy to each board member as well as to the IDOT Chief that was present at the meeting.

Anyone with a 5th grade reading comprehension can comprehend it!

How many more times do the FACTS have to be presented before the State’s Attorney steps up and takes action?  It’s no longer my interpretation of the law or just my wild opinion.  IDOT is in full agreement of my assessment as I have presented it in the past as well as how it’s presented in the document from the law firm as they are basically one in the same!  I have even included Illinois Supreme Court cases regarding this issue, and still no action to stop what is now factual violations of the law.

Link to Law Firm Opinion on Conflicts of Interest

From a top investigator for the state on the lawyer’s written opinion on Conflicts:

“This is a well written analysis of several laws that spells out in black in white how to apply the law. Someone needs to champion the cause to publicly state the laws and how they are applied.”

Where are the MEN in this county who will stand up to this criminal operation?

Chris Patrick has violated the Prohibited Acts statute as well as the criminal code covering Official Misconduct!  He should be charged with those crimes and removed from office.  His personal self interests are now, as clearly stated in the most recent letter from IDOT, placing not only numerous highway projects in jeopardy, but the very employment of at least 20 people.

With no funding available because of this ongoing refusal to follow or enforce the law, those people will have to be laid off as their entire employment is based on years of effort securing funding for County projects through State and Federal funding sources.  YEARS of work will be lost and the County will pay the price by these infrastructure projects coming to a screeching halt!

A man of Character would put the county ahead of his own personal financial gain, especially as an elected official!

Mr. Patrick attacked Rusty Bogue’s character over an expired airplane registration.  Rusty, shame on you for allowing that to happen!

Chris Patrick, shame on you for staying silent for 6 weeks so you could attempt to hammer Rusty in public.

To myself, shame on me for not following up on the Lawsuit filed against Chris Patrick by the Illinois Department of Transportation back in the 90’s.

A law suite that I think most will agree are common when operating a constuction business as things do happen, however reading the charges in that case and comparing it to accusations made about Rusty Bogue, I think everyone will agree its time to fill the court house!

What did IDOT have to say about Chris Patrick in their lawsuit, which related to a personal injury of a person in his employment?

I fully understand how things happen at a worksite but it’s clear, a man that allowed these types of things to happen, having 20 years of business experience, has absolutely no business questioning a young man’s character over an expired aircraft registration!  Nor is it appropriate to question a man’s business acumen who clearly acknowledges his expertise is in the sky, or working on planes, not the business side. That is why he hired people to handle those matters.  When something wasn’t done that needed done, he fixed it when he was made aware of it.

Chris Patrick, you sir have no business holding any public office as you have violated the law and have no regard for the law as is evident in your current and past actions.  Actions always speak louder than words.  You have placed your own personal interests ahead of the county and we will not sit idly buy and allow it any longer!

As I stated in the meeting today, We The People will pursue EVERY possible legal venue available to include the filing of a formal criminal complaint against you.  We have asked for compliance.  The state has given you the chance to comply and you violate your own signed agreement.

Chris Patrick, you sir need to resign, as well as face criminal prosecution.  This is no longer a case of you didn’t know or thought it was OK.  You were advised and clearly that advice fell on deaf ears with your arrogance that you somehow read things different because of what you were taught in school.  You sit in defiance and disagree with the law however the people of this county are finsihed with such defiance and disregard for the law from our elected officials.

To the good people of Edgar County:

February 13th, 2013 – 9AM County Board Meeting.  EVERYONE in this county should fill this courthouse and demand our laws be enforced!

Not convinced this is a huge problem that needs resolved NOW?  There are IKE projects that may well be in jeopardy as well for the Village of Kansas, Brocton, and I believe Metcalf.   If you live in those communities consider this as a call to action!  Come to the meeting and demand accountability.  The Voice of the People is what fixes these things!

It has been made clear:

This means the years of prep work that has gone into these projects by the county, on behalf of these communities, will be wasted.  Mr. Patrick is not only jeopardizing the employment of county highway workers but the long awaited improvements to numerous communities.

Come one, come all!  It’s time to take back our county! 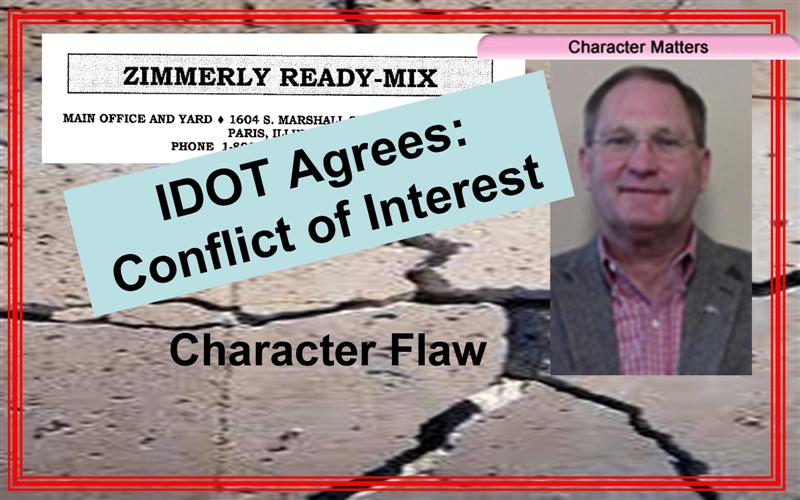