Deputy Dog and His Side Kick Dee

Is Ex-Deputy Dee Burgin hurting for cash?  He just dropped the price of his house $30,000.00 and is now threatening to sue the county for more of your tax dollars.  So when times get tough it appears Dee does what he does best, takes advantage of each and every opportunity to milk the public for more money into his pocket.

Looks like Dee is up to his old tricks and one can only assume his passion for hiring Chicago Attorneys for his dirty work sends a thrill up his leg.  Sadly for him, no one is impressed and from the looks of it I don’t think this one is going to get him near what he thinks.

It’s not enough that he has never met his obligation of paying the county $100,000.00 for the Ambulance and was collecting a section 8 rent check for his girlfriend renting one of his properties, that from all indications, she spent more time at his house than the claimed rental that our tax dollars are paying for.  Now Dee wants you, the taxpayer, to pay for some things that he is only slightly entitled to.

Probably the funniest part of the whole effort by Dee and his Chicago Attorney is the opening paragraph.

“I have the honor of representing Dee Burgin in the referenced matter.”

I’m guessing Dee didn’t tell him much about himself or his tainted history in this county.  From padding his time card as a county employee to violating a persons civil rights, there is no shortage of controversy when it comes to Dee Burgin.  I don’t think any respectable attorney would be honored if he knew the truth and history of such a client.

Now Mr. Burgin thinks he is owed compensation for keeping the K9 during his time as a deputy dating back to July of 2009. We recieved a copy of the Burgin Dog Claim obtained through a Freedom Of Information Act request with the Edgar County Clerk.

Now is the time I pray the States Attorney does his homework so we don’t get screwed again.  You see, Mr. Burgin, contrary to what his attorney is pushing for, is not entitled to “Dog Pay” beyond 2 years based on case president of this type of claim.

Mr. Burgin is entitled to compensation, assuming there was none previously, however that entitlement is limited.  It appears from reading his attorney’s claim for compensation they are taking things to the extreme when compared to case-law on such matters.

For example, the claim of an hour per day for taking care of his dog is, let’s just say, a little extreme!  As decided in Federal Court: The “appropriate” minimum compensation time is :30 minutes per day, seven days per week which totals a minimum of 3.5 hours a week, which is HALF of what Mr. Burgin is demanding.  More important on this issue is case-law that has upheld this is Levering v District of Columbia, which specifically states the “appropriate time” for such activity is 30 minutes a day.

In Brock v City of Cincinnati, they upheld an agreement between the handlers and the agency of 17 minutes per day, seven days a week for at-home canine care.

Why is this important?  Because each hour a week added to Mr. Burgin’s pay puts him into receiving more overtime compensation.  So of course he would want to pad that pay stub by claiming he took care of the dog for an hour a day, 7 days a week instead of 3.5 hours a week. Doing so pushes him into more overtime pay, thus more money from you the tax payer.

The Fair Labor Standards Act (FLSA) outlines a two-year statute of limitations on this type of compensation claim provided there was no willful intent on behalf of the employer. If there was, then he could claim up to 3 years of compensation.  Considering FLSA is pretty much the law of the land, Mr. Burgin can forget about getting any compensation beyond the 2 year limitation, provided our Elected Officials fight to protect our tax dollars and do the proper research.

Another interesting “padding” of the claim is the rate at which he thinks he should be compensated.  Any attorney worth their salt is going to know that dog care activities do not have to be compensated at the same rate of pay as paid for law enforcement activities.

Of course he is going to claim as much as possible however he clearly is not entitled to his employment rate unlesss he can prove that was agreed to.  It is going to be interesting to see how the county is going to handle this one.

In HELLMERS v TOWN OF VESTAL, NEW YORK it was cited that if a canine officer’s specific exertions, even though of type that would generally be compensable, exceed reasonable limits, they cannot be considered integral and necessary and, therefore, do not constitute work so as to be compensable under FLSA.

I think I could make a clear case that Mr. Burgins claims for Total Dog Expenses of $8,912.20 exceed reasonable limites.  My father raised and showed dogs and I watched one of those dogs, a Miniature Pincher, become a Grand Champion.   I can assure you that under no circumstances would it have cost us $6,000.00 in Grooming Expense, even in todays dollars!  I do find it interesting his attorney acknowledges that Mr. Burgin has “some” records.  I guess Dee figures since the county never asked for receipts in the past for stuff they might over look it now.

Our Freedom of information request to the County clerk included some interesting facts in this case that I am betting Mr. Burgin failed to tell his attorney, which as we know from past experience is not uncommon for Mr. Burgin.

According to the Sheriffs office it was discussed that Mr. Burgin would work a 7 hour day and get paid for 8 hours, the extra hour being kennel time.  It appears from the letter the Sheriff sent the state’s attorney, Mr. Burgin claimed he really didn’t want to be compensated for the canine unit.  That might have been the case before and actions would indicate such because there has not been any request for compensation until after he was relieved of his employment.  He also didn’t want to use the county dog food that was offered but now he expects you the tax payer to pay for his own purchased dog food, that from what we have been told, may have included another dog also eating at his home.

An un-confirmed report at this time is that Mr. Burgin may have received some type of insurance pay-out when the dog died.  When we have confirmation on this we will update accordingly.  If there was an insurance payout on a county asset, I wonder how that is going to play into the claim?

Yes, Mr. Burgin is entitled under the FLSA rules to be compensated; but one must ask, why after all these years of being silent is he asking asking for compensation now?  I think it’s a pretty big question considering the following.

After speaking with dog training organizations an answer to one question was common place.

Do you teach the K9 handlers about their compensation rights related to dog care?

Each one of them confirmed they cover that in their training so that leads to another interesting question.

Was Dee Burgin aware of the law pertaining to this?  Now, under the law, he is entitled to what is called “liquidated damages” in an amount equal to the wage shortage.   That basically doubles what is owed to him since it was not taken care of properly from the beginning!

His attorney is going to get 33% provided its settled prior to a court filing and if it does get to court the rate goes up to 40%.

I suspect the County Board is now wishing they would have enforced the contract they had with Mr. Burgin and collected the $100,000.00 that he never paid for the ambulance, which by the way can still be collected under contract law! 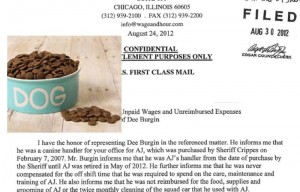