Was that the vessel of choice for certain employees of the Edgar County Mass Transit District?

After a quick review of documents received thru a Freedom Of Information Act request, the following was revealed:

Airfares, cruiseliners, farm implements, groceries at Wal-Mart, lunches and dinners at Paris restaurants, hotels, and even Victoria’s Secret lingerie. Some of the items have been returned, albeit used, to the Mass Transit District. It now appears as though there were two people involved, they were both eventually terminated.

We still have another FOIA request that is due back to us next week that should reveal the high ticket items.

Timeline as we know it

May 1, 2012 – A meeting was held to discuss the the Auditors finding of certain spending by Kami and Ashley Miller.

May 4, 2012 – The board changed the locks on the Mass Transit District offices.

May 4, 2012 – Kami Miller was placed on paid leave and given a chance to provide an explanation of the expenditures.

June 4, 2012 – Kami Miller was terminated – we do not know whether she provided or refused to provide explanations.

These are some of the items your tax dollars have been spent on – and we haven’t even begun to expose all of it!

I just hope the board doesn’t think the return of some items makes up for the acts that led up to all of this.

Check back – we will continually update this as information becomes available. 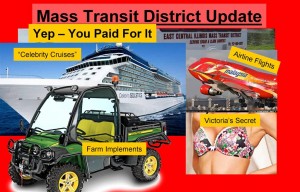